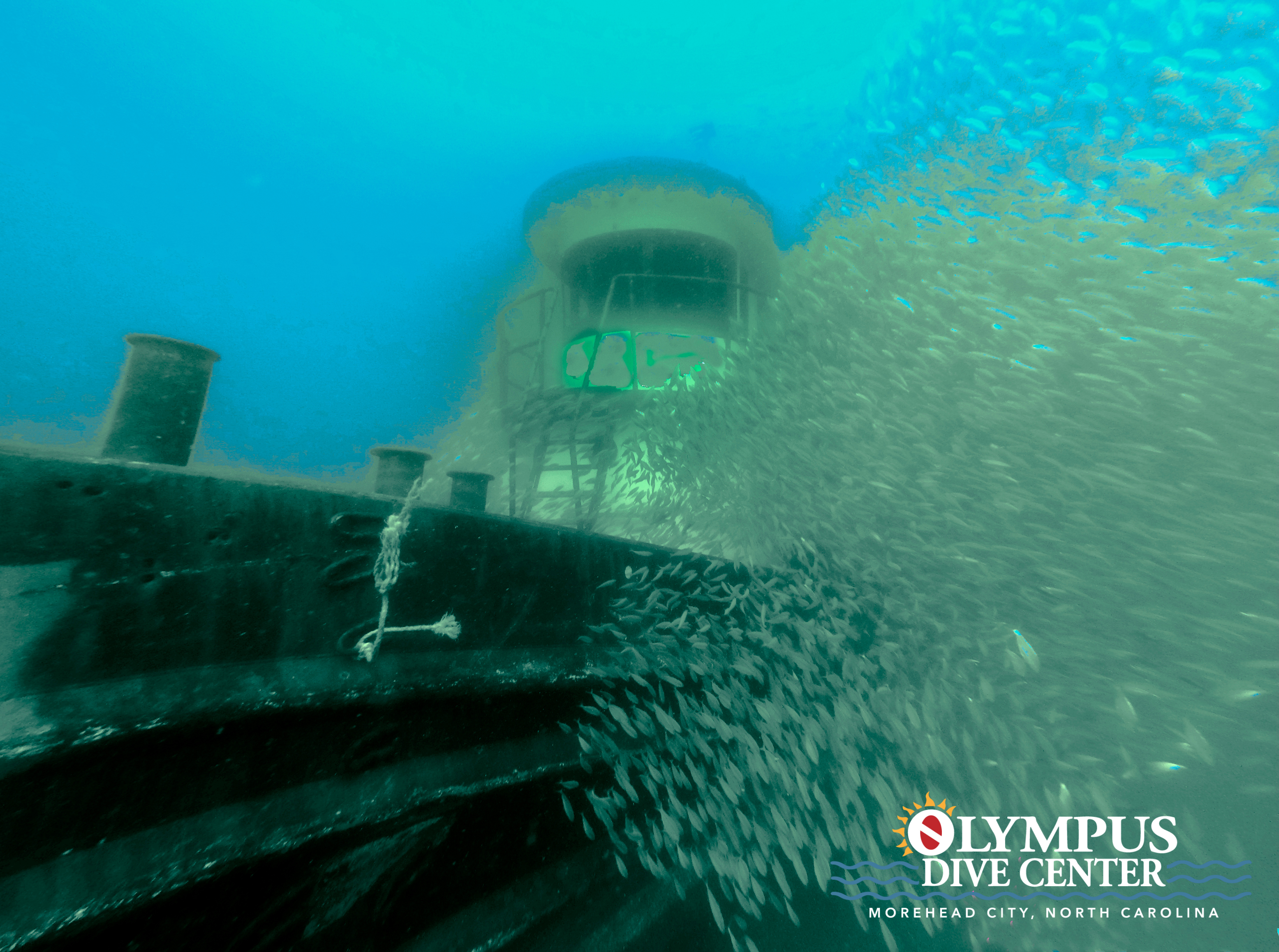 Being underwater obsessed in North Carolina means also having a complete and total addiction for the magical lore and exploration of shipwrecks. North Carolina holds the brass porthole to some of the World’s best diving and marine life habitat areas. Our mysterious “Graveyard of the Atlantic” is a proud heritage with a rich history that we hear ghost stories about in our youth and many of us venture out and explore as we get older. As an eastern North Carolina youngster, I recall many tales of such wrecks including stories from my favorite folklore novelist, Charles Harry Whedbee. Shipwrecks, as an adult bring an entire new meaning, especially as a diver. To see them up-close and touch and feel them there at the bottom of the ocean, it brings up an entire new reverence for protecting and preserving the historical significance, but it also makes me realize how vital they are to our marine life habitat.

Right off our coast in North Carolina, World War II left behind a catalog of wrecks that biologists find provide a beneficial hard structure habitat which is crucial since most of these portions of the ocean are dominated by sandy bottoms. The hard structure that shipwrecks provide offer a sanctuary for hundreds of species and provides a much needed substrate for other marine species that would otherwise not exist in these sandy bottoms. When I dive wrecks, I find that some of the most fascinating marine animals are attracted to them, including my favorite – sharks!

Since shipwrecks are so crucial to North Carolina for marine habitat and our local tourism economy, I am very excited about the new shipwreck, a 180’ former Menhaden boat that has been announced to become a new underwater reef in honor of our former North Carolina Reef Coordinator, James J. Francesconi. The plan is to sink the wreck in approximately 60-70 feet of water near the wreck of the USS Indra, which is about 12 miles past the Beaufort Inlet.

James J. Francesconi started working at the NC Division of Marine Fisheries in 1987. In 2000 he became the Reef Program Coordinator where he served for 14 years before losing his battle with leukemia on July 18, 2014. This wreck reef project will memorialize and honor his contributions to the NC Reef Program, including his efforts resulted in hundreds of improvements to artificial reefs in North Carolina spanning from the northern Outer Banks to Long Bay, including the creation of the New River Reef off the coast of Jacksonville and Camp Lejeune, the Jim Knight Reef close to Oak Island, the Bob Black Reef located near Frying Pan Tower, and the sinking of the USCG SPAR, the Titan Tug, the Captain Greg Mickey, the Pawtucket Tug, Capt. Charlie, as well as the USCG Falcon aircraft.

Many divers are familiar with these sites and now have the opportunity, not only to contribute to a new dive site and help create marine life habitat, but also to memorialize the man who helped make some of their favorite dive sites happen. The process of creating this underwater memorial has been possible recently due to the continued efforts of the interim Reef Coordinator, Gregg Bodnar, Tim Mullane of American Marine Group, and a local group of fundraising and reef activists including our local dive community. However, creating this underwater memorial is a large financial undertaking and the JJF Reef Project is still seeking donors.

A significant portion of the memorial funds have been raised through the North Carolina Department of Motor Vehicles license plate program that began in 2005. North Carolina divers who have purchased license plates with the red and white “diver-down flag” have raised around $70,000.00 and those funds are earmarked for the development of North Carolina’s offshore artificial reefs. If you would like to be a part of the JJF Reef Project and thus support marine habitat, fisheries, and tourism, you can visit http://www.GoFundMe.com/JJF-Reef-Project and follow the facebook page https://www.facebook.com/JJFReefProject.

The fundraising group is headed up by Bobby Purifoy of Olympus Dive Center in Morehead City, Debby Boyce of Discovery Diving in Beaufort, and Carteret County diver Steve Broadhurst. They have set up accounts for donations with the East Carolina Artificial Reef Association as well as the Big Rock Blue Marlin Tournament.

You can also donate by entering a raffle at Olympus Dive Center. The raffle is for a dive charter with Olympus and chances are you will be able to visit one of the awesome wrecks mentioned here in this article. All proceeds from the raffle will benefit the JJF Reef Project. Please visit https://www.olympusdiving.com/ or https://www.facebook.com/olympusdivecenter for more information.

Blue Skies and Calm Seas to you all.